The Irish connection to ‘Le Nozze di Figaro’ goes right back to its premiere at the Burgtheatre in Vienna on 1st May 1786. The Irish tenor Michael Kelly, who was on friendly terms with the Mozart family performed not one but two roles on that famous night. Don Basilio, a music teacher and Count Almaviva’s confidant and fixer and Don Curzio, a judge also entrusted by the Count to enforce Marcellina’s lawsuit against Figaro.

Famously the great opera challenged contemporary social moeurs around class and sex by presenting them in the guise of humorous satire. Pierre Beaumarchais’ original play had been banned by Louis XVI of France. Napoleon Bonaperte apparently called it’s attacks on the aristocracy ‘the Revolution already put into action’. Beaumarchais revised the text and transferred the action from France to Spain and this version was reluctantly given permission for public performance and is the one Mozart and Lorenzo Da Ponte based their opera on.

I was surprised to see that the DIT Conservatory were preforming ‘Figaro’ as the opera doesn’t come without its difficulties. Famously convoluted cross plots, disguises & swapping of costumes and a large cast of characters can lead to an audience without some grounding in the plot lines getting completely lost. ‘Figaro’ is also a long opera of four acts taking about three hours to perform (and this is the ‘trimmed’ version performed today!) and of course it is sung in Italian. However the program did come with a extensive synopsis and gave the unwary attendee an idea of the shenanigans to follow.

The music for the performance was performed wonderfully by the DIT Symphony Orchestra, an extensive body of players of obvious talent conducted by Killian Farrell. After a very accomplished rendition of the overture and then the opening bars of ‘Cinque, dieci, venti’, I got the distinct impression that this might not be a run of the mill student production.

The set was a rather simple one of rotating backdrops, light one side with projected motifs for the indoor daytime scenes, dark the other for nighttime. I find over fussy stage sets not to my taste so this rather minimalist approach was appealing and of course gives the performers a cleaner canvas on which to paint their characters and hold the attention of the audience. The costumes were turn of the century and quite a bit of work seemed to have gone into their authenticity. They certainly added a lot to the characterisation and in conjunction with the rather sparse set created a strong visual focal point on the performers.

Kevin Neville was a convincing Figaro, his black valets uniform drawing a contrast with other rather rakishly attired Figaros. His tenor voice was clear and bright and Amy Ni Fhearraigh was a suitably reserved yet somewhat pert Susanna again with a clear ringing tone. The entrance of Daiga Berzina and Rory Dunne as Marcellina and Dr. Bartolo respectively was quite intriguing, one could immediately sense the chemistry and comfort between these two excellent singers and actors. Their lion-taming vignette after Dunne delivers a rousing ‘La Vendetta, oh, la vendetta’ as he plots against Figaro was excellent.

Also starting in Act one and indeed throughout the performance Niamh St John as Cherubino had a very strong stage presence and is a wonderful character actor. Expressive and animated she portrayed the mischievous and love struck Churebino with aplomb. As Figaro taunts Cherubino about ‘his’ imminent dispatch to the army with the stirring aria ‘Non piu andrai’, St John’s acting the part of the rather naive young soldier marching around the stage and saluting to the taunts and jokes was a comic highpoint of the performance, Wonderful.

Early in the performance an off stage problem revealed itself through the rather blurred and somewhat sketchy surtitles. The legibility of the surtitles seemed to improve considerably after the intermission although there were still passages without titling and their positioning off to the right of the stage was visually inconvenient especially for those who may not have been familiar with the opera.

Conleth Stanley accounted for himself well as Count Almaviva. He has a strong voice and a good stage presence and his interpretation of the Count had just the right mix of aloofness, vengefulness, and a touch of cruelty, while as the Contessa, Muireann Mulroney, was wonderfully reserved and melancholic delivering her anguished cavatina and aria ‘Porgi Amor’ and ‘Dove Sono’ beautifully. 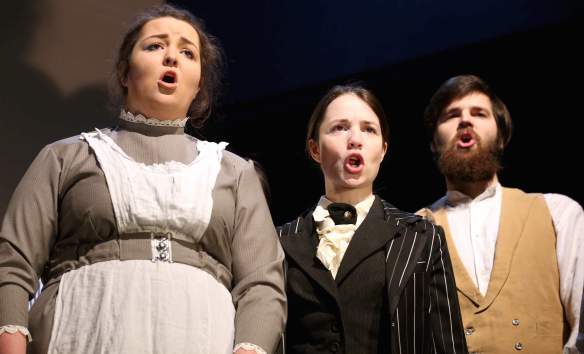 The chorus were a joy to listen to and looked very natural on stage, not at all giving the impression of being ushered on and off when required. Of course ‘Figaro’ features some amazing choruses and these were delivered excellently.

Act four is the one where confusion reigns onstage and possibly confusing for the uninformed viewer as at various stages the Countess, Suzanna and Cherubino are all in disguise and hiding their identity. The crossing plot lines in Act four are infamously convoluted.

Overall this was an excellently staged and thoroughly enjoyable performance notwithstanding its complexity. This was achieved with excellent musicianship, singing and acting. For opera lovers who are all too often dismayed by stories of companies closing, falling attendances and an ageing fanbase, DIT Conservatory’s production was joyous, uplifting, entertaining and very professional.

One of the highlights of Swan Lake, if indeed highlights can be plucked from such a Masterpiece, has to be the Dance of the Little Swans from Act II.

Prince Siegfried has arrived at an enchanted lake deep in the forest where he sees Odette and the other swans in the moonlight but cannot bring himself to raise his bow to slay any of them. As he watches he sees some young swans swim out onto the lake, surrounded and protected by the older ones.

The young swans want to appear as beautiful and elegant as the older ones who swim so protectively around them but they still need to huddle together for support and comfort as they perform their half elegant half awkward dance before trying to take flight from the lake. But alas they can’t spread their wings as they are too young and like all the other swans they are under the spell of the sorcerer Von Rothbart which keeps them confined to their earthly avian beauty.

The dance of the Little Swans was added to the 1895 revision of Swan Lake which is the version mostly performed today and is for obvious reasons a ballet school favourite. It is also the source of some rather humorous….interpretations!

Vey excited at getting my tickets to the Royal Moscow Ballet who visit Ireland for five performances of Swan Lake in March. There are a number of versions of Swan Lake and there is a happy ending version and a sad ending one to confuse things even further. The sad ending where Odette and Siegfried break Von Rothbart’s spell by proving their true love in death was considered to have mystical and religious overtones by the soviet regime so a happy ending was created with the true love and the spell breaking but not the death. The version most performed today is the 1895 version but with the happy ending.

Swan Lake is probably one of the most beautiful spectacles you will ever see and although I have seen a number of recorded versions I have never been to a live production. Of the versions recorded on DVD I recommend one by The Royal Swedish Ballet recorded at The Royal Opera House Covent Garden in 2002 and released by the BBC & Opus Arte. This is a full, traditional, classical version….sublime.

Swan Lake has what is considered to be the most difficult role for a ballerina in the repertoire not least because the lead ballerina must play two roles, that of Odette and Odile who are meant to be diametrically opposed characters, the famous White Swan/Black Swan, and as such requite different dancing techniques and dramatisations. Swan lake also has the famous 32 fouettés performed by Odile in Act 3 where the audience and I dare say the whole cast wish the ballerina on to the end successfully.

While accepting that opera is essentially a live art form, a lot of performances nowadays are being recorded to extend the experience beyond the immediate audience and allow those who cannot attend for financial or geographical reasons to have a sense of the live experience. 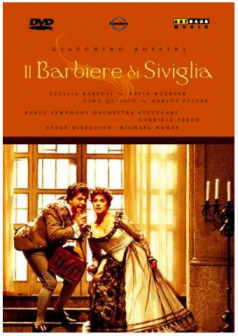 I have a small collection of DVD’s which started a number of years back with a performance of ‘The Barber of Seville’ featuring Cecelia Bartoli as Rosina and Gino Quilico in the title role.

The Barber is such wonderful introduction to Opera, awash with great tunes and bursting with comic scenes. Still to this day probably my favourite opera and of course Cecilia Bertoli in this production is a mesmerising Mezzo who can do justice to Rossini’s requirement for vocal gymnastics.

But pride of place in my DVD collection has to go to the recording of David McVicars production of Mozarts  ‘Die Zauberflöte’ from The Royal Opera House, Covent Garden in 2003. Simon Keenlyside is wonderful as Papageno but this production is remembered for German soprano Diana Damrau’s performance as The Queen of the Night. An absolute jaw dropper that had me glued to the screen and a regular visitor to youtube ever since for regular top ups. I can’t recommend the recording of this production highly enough, it is stunning.

In a recent article in The Guardian, artistic directors of seven UK opera houses were asked why Opera matters and while most of the answers mentioned the cultural significance, the artistic importance, the creativity, the wonderful singing and musical talent not to mention the sheer enjoyment of the live performance, I found the response from Oliver Mears, artistic director of Opera Northern Ireland, most interesting.

His reply opens with ‘Opera is important because it is totally unfeasible’ and he proceeds to articulate the impracticality of opera. The demands it makes on music, singing, staging, acting etc… the financial cost and the complexity of this most illogical of art forms.

But by doing this he points out the very reasons why Opera should be supported and encouraged and why its presence should be vital to any community with an artistic sensibility. Opera is a tangible expression of the human spirit. In its very ‘lack of deference to economic realities’ to quote Mears, lies its human, emotional and artistic importance. In its very illogicality lies its achievement.

Giselle Allen as Senta and Bruno Caproni as The Dutchman