Antonio Vivaldi (1678 – 1741) is best known today for his collection of Violin concertos ‘The Four Season’, they are among some of the best known and loved tunes in orchestral music. Although he was a very prolific composer who achieved great success and fame during his lifetime and is virtually a household name today, after his death his music fell out of favour and was rarely performed. Despite the popularity of his music and his success as an impresario he died in poverty in Vienna and was buried in a municipal grave, just as Mozart was fifty years later. Interest in his work was rekindled in the 20th century with a large number of previously lost manuscripts being found and he returned to public recognition with violinist Nigel Kennedy’s hugely successful 1989 recording of The Four Seasons. Although best known for his concertos, sonatas & sacred music Vivaldi appears to have written about 50 operas, many of which are lost or survive in fragments only. Griselda is one of his later operas first performed in Venice in 1735 where for many years he had been music teacher at the Ospedale della Pietà orphanage for girls.

Antonio Vivaldi and cover of the libretto from Teatro San Samuele in Venice where Griselda has it’s premiere in 1735.

As is often the case with opera the story of Griselda, by librettist Carlo Goldoni and based on Giovanni Boccaccio’s ‘Decameron’, is a complicated one of convoluted relationships, misunderstandings and mistaken identities with a healthy dollop of tragedy. But at least a saving grace in this case is a broadly happy ending! Gualtiero, King of Thessaly, dismisses his queen, Griselda, as his people are unhappy with her being queen because she is a commoner (as presumably most of them are). Her replacement, unknown to anyone, is Constanza their daughter who is believed to be dead. Griselda is heart-broken and tormented by the misfortune that has befell her and to make matters worse she has attracted the unwanted attentions of Ottone who pursues her to the point of threatening to kill her other child Everardo (possibly not the best romantic overture but this is opera!). Tragedy and misfortune continually pursue Griselda but as she slips into grief and despair she never loses her love for Gualtiero. Eventually on seeing how loyal and virtuous she is the king invites her back to be his queen once again.

The stage was an unfussy two tiered affair, state room above and building site below which accentuated the upstairs-downstairs divide. A security office stage left had a bank of cctv monitors which showed various action on and off stage. A very imaginative touch which accentuated the oppressive and claustrophobic atmosphere of continual surveillance. It may be a side issue for many but a bugbear of mine can be surtitles but in this production, which was sung in Italian, they were excellent. The stage design allowed for them to be mid stage, literally right in the centre of the action. Absolutely wonderful & really adding to the enjoyment of the opera.

On front of the packed theatre the Irish Baroque Orchestra was conducted by Peter Whelan at the harpsichord. Noticeable from even the back of the theatre was the long neck of a theorbo amongst the players and the occasional addition of horn players stage right. Despite the proximity of the musicians to the audience the volume of the beautiful music wasn’t overpowering and the singing could be clearly heard from the stage.

And that brings me on to the undoubted highlight of this production. The singing was outstanding in beauty, quality and technical ability. It was such a treat to hear this quality of vocal performance from all the singers. Tenor Jorge Navarro Colorado was a regal and confident King Gualtiero. Right from the Act I aria ‘Se ria procella sorge dall’onde’ (If a wicked storm rises from the waves) his excellent voice and powerful delivery were obvious. Taking the title role mezzo-soprano Katie Bray, audience prize winner at this year’s Cardiff Singer of the World, was at home and convincing as the slowly disintegrating Griselda. The intensity and passion in her voice wonderfully captured her distress and disillusion as her world collapses.

Soprano Emma Morwood brought wonderful bling, vim and sparkle to her role as Constanza as she struggled to contain the frustrations of her lover Roberto played by counter-tenor Russell Harcourt. Hearing the intensity and clarity of a good counter tenor singing in a high register can be quite surprising to many listeners. The power & clarity of Russell’s voice was a joy to listen to. Raphaela Mangan, another talented mezzo-soprano, was aloof and detached patrolling the palace as Corrado. 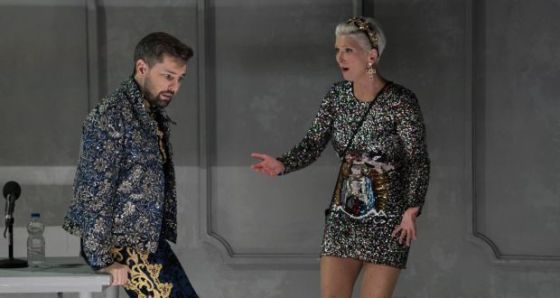 Russell Harcourt as Roberto and Emma Morwood as Constanza.

If I had to pick a favourite hue among the incredibly colourful palate of voices and performances the audience were treated to it would be mezzo-soprano Sinéad O’Kelly’s performance as Ottone.  She perfectly balanced the cruel malevolence and romantic yearning of her character with a convincing & natural stage presence allied to an incredibly rich, powerful and dynamic voice. She really was quite spectacular.  The sheer beauty, talent and richness of all the singing in this production can’t be overstated.

This was certainly one of the most enjoyable operas I have attended. Occasionally you can find yourself glancing at your watch towards the end of a production but at just over two hours I wished this sparkling musical and vocal celebration could have went on much longer. It really was that good. The resounding approval of the audience and the standing ovation was richly deserved… I loved it.