Partly cautionary tale, morality play and coming of age story, Engelbert Humperdinck’s Hansel & Gretel has charmed adults and children alike since its premiere just before Christmas 1893. The opera is based on the fairytale ‘Babes in the Wood’ by the Brothers Grimm but adapted to a more family friendly libretto by Humperdinck’s sister Adelheid Wette. Originally written as folk songs to entertain her children it gradually morphed into a full blown opera which married traditional folk tunes with contemporary musical styles and motifs. The work was an instant success and received great praise from such composers as Richard Strauss and Gustav Mahler. A wonderfully captivating drama expressed through beautiful and memorable music which has continued to attract old and young alike.

Hansel and Gretel are left to do the housework while their parents are away. Mother returns to find the children idling with no work done. They have spent all their time playing and dancing. Annoyed she sends them to the forest to collect berries as there is no food in the house. Father returns from the market buoyed by a good day selling his brooms. He asked where the children were. When he hears that mother has sent them to the woods as punishment he gets very worried. There’s a witch that lives in the woods and children have got lost there and have never been seen again.

The story of Hansel & Gretel has entered our popular culture through book, films & illustrations.

Now deep and lost in the woods the children get very frightened as night falls. The Sandman appears and lulls them to sleep and as they sleep angels descend from the heavens to guard them. Woken by the Dew Fairy in the morning the children see a gingerbread cottage. They go inside and realise it is the house of a witch who intends to fatten them up, cook and eat them. The children eventually trick the witch into looking into her flaming oven and both children push her into it. The oven opens and the children the witch has kidnapped and turned into gingerbread come back to life and are freed. Mother and father appear and everyone dances and celebrates, and they all live happily ever after… I imagine.

Irish National Opera’s production moves a story which was originally set in the forests of Germany to a rather dark and run down hotel with flashing neon lights where a silent night watchman observes the story as it unfolds. The Irish National Opera Ensemble who entered one by one wearing party hats played on stage and were conducted from the piano by Richard Pierson.

The set was a two tire affair which, like the recent production of ‘Griselda’, essentially doubled the stage space. Dark and a touch claustrophobic it echoed the mood of the original setting of the opera and although updated the production stuck very closely to the original opera in mood and feel. Originally written in German this production was sung in English with surtitles each side of the stage. 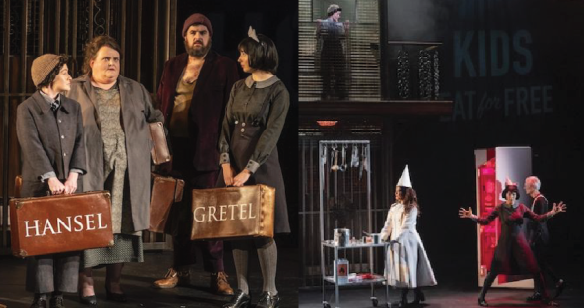 Both Raphaela Mangan and Amy Ní Fhearraigh gave strong and joyful performances as the siblings Hansel and Gretel. They easily and convincingly adopted the youthful mannerisms of their characters. Mangan’s Hansel with his boyish bravado & bluster, Ní Fhearraigh’s Gretel her juvenile dancing and rhymes. Both sung their parts with confidence and clarity with Ní Fhearraigh getting the lion’s share of the virtuoso singing. Her vocal skill and precision was obvious on some of the opera’s highpoint like ‘Little brother dance with me’, and ‘A dwarf stood in the forest’.

Miriam Murphy was a splendidly distraught and stressed Mother with a strong and articulate vocal and character performance. Baritone Ben McAteer’s deep and resonant voice gradually filled the theatre as he made his off stage entrance to ‘Far-la-la-la’ in Act I. A deep and resonant singer with great volume and precision. Carolyn Dobbin was quite spectacular as the Witch. The Act III ‘Now Gretel, you’re the sensible one’ and ‘Now wake up, it’s time to eat’ were a singing and acting tour de force from Dobbin.

Emma Nash was the Dew Fairy and although a small part with only one real singing opportunity she gave a solid and confident performance while Raymond Keane as the silent Watchman was an interesting addition to the production. Obviously a seasoned actor with a very expressive manner he facilities and witnesses the action from start to finish, almost as a silent observer like the audience itself.

Quite a large number of younger people made up the audience of the almost full house at Solstice Arts Centre in Navan. A slight concern about mobile phones, crunching crisps and rustling sweet wrappers proved unfounded. All were glued to the action on stage. Produced with Theatre Lovett who have a long tradition of children theatre, this was an enjoyable and entertaining production. A wonderful mix of fairytale and highest quality singing and acting. Yet another fabulous production by the team at Irish National Opera.