Well the Summer holidays are truly over and we’re all back at our desks and here at Operakey I’m delighted to be back doing what I love doing most… talking Opera! I will be looking at some of the operas I have been listening to over the summer which will include works by Harrison Birtwistle, Philip Glass, Albert Lortzing & Vincenzo Bellini. I will also be reviewing the upcoming and eagerly awaited production of Don Giovanni by Opera Theatre Company with a new translation by Roddy Doyle but first to a composer who I have been listening to quite a lot recently and one who we have looked at previously here on Operakey, the Finnish composer Kaija Saariaho (see L’Amour de loin). This time we will be looking at ‘La Passion de Simone’ which is technically an oratorio but lets not concern ourselves with that.

Saariaho attended the Freiburg conservatory of music in Germany and studied under a regime of strict serialism (imagine – percussive, atonal, dissonance) where she says

and later she came under the influence of the Spectral composers. Spectralism, which developed in France in the 1970’s, involved experimenting with the use of computers in composition and though some of the works in this style can be rather angular and anaemic Saariaho marries these electronic elements which are often quite subtle with tonal orchestration to create a truly beautiful and ethereal style.

The inspiration for ‘La Passion de Simone’ was the life and death of the French philosopher, political activist and Christian mystic Simone Weil who starved herself to death in an English sanatorium in 1943, aged 34, in empathy with the hardships and suffering of her fellow countrymen under Nazi occupation. Weil was an incredibly complex and fascinating individual and some knowledge of her life is certainly helpful in appreciating this work.

The libretto is by the French Lebanese author Amin Maalouf who Saariaho regularly collaborates with and takes the form of fifteen sections or ‘Stations’ as they are called to evoke the comparison with the Stations of the Cross (Saariaho very much sees Weil’s life as a spiritual journey) and the piece in many ways takes the form of a traditional Passion Play as each station deals with a specific event or period in Weil’s tragic life. At the core of the piece is Weil’s continual struggle against injustice and inhumanity and the desire not only to sympathise with but also to actually experience the pain and suffering of others, be they struggling for economic survival (her insistence on working in factories) or for political or national freedom (she briefly fought for the Republic in the Spanish Civil War and for the French Resistance in World War II).

There is only one main character in this work, Weil’s imaginary sister who sings her thoughts and feelings about the various stages in Weil’s life while a narrator occasionally reads passages from her writings and a small chorus provides colour and resonance to the vocal style. Like other works by Saariaho La Passion de Simone has a very spiritual and ethereal feel, an almost floating unworldly quality that seduces the listener into its soundscape. The stage setting for the original production was by the rather controversial American director Peter Sellars and features the singer on a raised platform and very little else. As mentioned in previous posts I am a fan of minimalist stage design and the lack of visual clutter works particularly well with a piece like this which is so musically and vocally absorbing, the movements and expressions of the singer being the conduit for the emotional strength of the libretto. 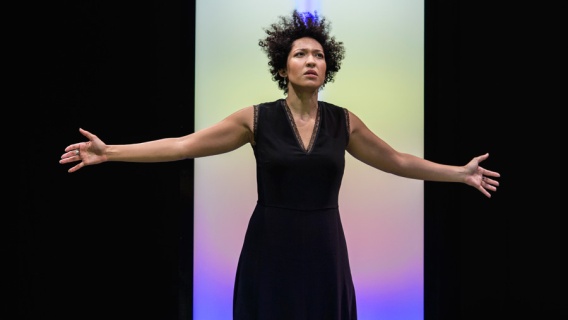 The orchestration echoes and reinforces the themes of each of the stations whether it be the percussive and almost threatening style of the 5th and 6th station where Weil, despite her education and comfortable life chooses to work in factories in order to live the experiences of poor people or the almost angelic and otherworldly style of the 13th (‘Slowly you give up the ghost my little sister Simone’). and 14th (‘Every evil is aroused in the world’) station as Weil fades away and eventually dies of malnutrition.

La Passion de Simone is an impressively beautiful and haunting work and like much of Saariaho’s output it bucks the trend to more dissonant stylings in much contemporary vocal composition. Yes, traumatic or disturbing passages in the libretto are accompanied by surging and angular orchestration but this is to serve the text and the overall power of the work is in its beauty and its ability to take the listener into the world it creates and hold them there. I strongly advise readers to listen to more of Saariaho’s choral and orchestral works as she is certainly one of the most impressive contemporary composers and one gets the impression that despite the very modern feel of much of her work and the subtle use of electronica she is a composer who has a great love of the classical and impressionist traditions.

The recording I have is on the Ondine label and features American Soprano Dawn Upshaw for whom the soprano piece was originally written. It is quite a demanding vocal piece and Upshaw’s performance is moving and absorbing (she missed the world premiere in Vienna while under treatment for breast cancer but performed the UK, French and US premieres).