The debut album from French mezzo Marianne Crebassa has certainly brought a warm glow to my new year at any rate. A wonderful collection of arias from some of the great trouser roles in opera sung with a beauty, power and skill that is truly inspiring. Trouser or breeches roles in opera are male characters that are played by women. Called ‘travesty’ roles in Italian, many of these roles were originally sung by castrati but are now performed mostly by mezzos but increasingly by counertenors who have a similar vocal range. (Countertenors are the highest register in male voice and with changing musical training and styles are coming back into fashion. See Philippe Jaroussky for example).

The album opens with an absolute show stopper ‘Amour, viens rendre à mon âme’ from Orphée et Erudice by Christoph Willibald Gluck. A tour de force of shimmering singing from this seminal work which clearly announces that you are in for a real treat with this album. Mozart who wrote some great trouser roles has, at six, the greatest number of tracks on this collection. Two from the rarely performed early opera Lucio Silla from 1772. The restless and uplifting ‘Il tenero momento’ from Act I as Cecelia anticipates meeting his beloved Giunia and the heart wrenchingly beautiful ‘Pupille amate’ from Act 3 as he prepares for the last farewell to his beloved from his prison cell before being put to death. (he is pardoned eventually, and gets his girl… a happy ending, in opera!).

On an album of great trouser roles the impish and lovestruck Cherubino from Le Nozze di Figaro has of course to make an appearance. Crebassa performed this role with aplomb for the Dutch National Opera last year and here we are treated to accomplished renditions of ‘Non so più’ where Cherubino tries to explain to a rather bemused Susanna his infatuation with women and later with ‘Voi che sapete’ he treats the distraught Countess Almaviva (our friend Rosina from ‘Il barbiere di Siviglia’) to his inner romantic machinations and torments. The rather urgent and dramatic ‘Va’ pure ad altri in braccio’ from the early and rarely performed La finta giardiniera is also included while the suitably climatic ‘Parto, ma tu ben mio’ from Mozart’s last opera La Clemenza di Tito closes the collection.

Mozart’s mark on this collection doesn’t end there as there is also a tune from Reynaldo Hahn’s Mozart, an homage to the great man written in 1925 where the young Mozart is played as a trouser role. Although of a different era and style to the other pieces in this collection ‘Alors, adieu donc, mon amour!’ sits quite comfortably amongst them. 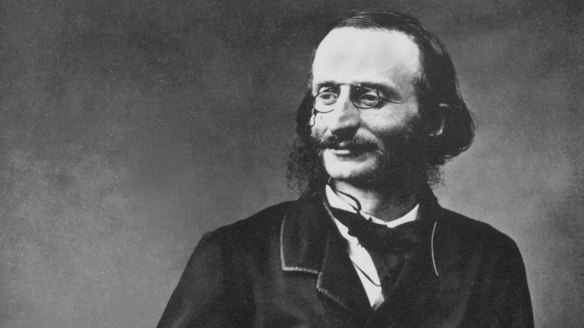 Jacques Offenbach, that most French of composers.

That most French of composers Jacques Offenbach (think, the Can-Can!) is represented by the beautiful ‘Vois sous l’archet frémissant’ with its weeping violins from his masterpiece Les Contes d’Hoffmann where Nicklausse tries to consoles the heartbroken Hoffmann by telling him that only in art can true love be found. ‘Poet, give your heart! It consoles your tears.’ We are also treated to ‘Voyez dans la nuit brune’, the beautiful ballad from Act I of the again rarely performed Fantasio where Crebassa hauntingly sings the title role of the young student.

Continuing the roll call of great French composers Charles Gounod makes his presence felt with ‘Versez vos chagrins dans mon âme’ from Faust and the jaunty and uplifting ‘Que fais-tu, blanche tourterelle’ from Roméo et Juliette where the loyal Stéphano taunts the Capulets that their beloved young Juliet will soon be amongst the Montagues with his master Roméo. 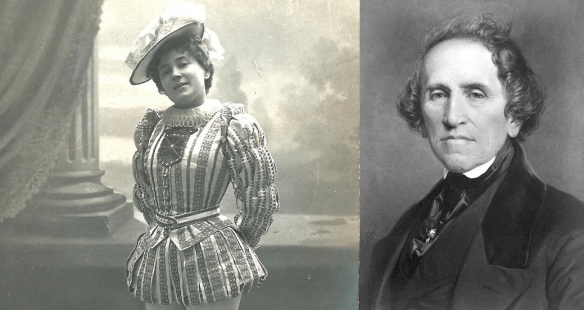 Cécile Eyreams as Urbain in ‘Les Huguenots’ and the composer Giacomo Meyerbeer.

Certainly one of the highlights here is the astonishing ‘Nobles seigneurs, salut’ from Giacomo Meyerbeer’s grand opera Les Huguenots. It’s an enormous four-hour work which recounts events around the St. Bartholomew’s Day massacre in 1572 from a composer who was wildly popular in his day but broadly ignored today. Les Huguenots with over 1000 performances at the Paris Opéra by 1900 is possibly the most performed opera in the 19th Century (Surely a credit to the attention spans of earlier generations). Crebassa absolutely sparkles here with an incredibly agile and technically brilliant rendition. Stunning.

Another wonderfully romantic aria is ‘Ô petite étoile’ from Emmanuel Chabrier’s opera L’Étoile, an underperformed work which is returning to favour with The Royal Opera giving its Covent Garden debut last year (it was premiered in Paris in 1877). There is certainly a strong showing of lesser known works in this collection and the slow and aching  ‘Sommeil, ami des dieux’ from Psyché by Ambroise Thomas is no exception as indeed is ‘Cœur sans amour’ from the very rarely performed work Cendrillon by Jules Massenet.

From start to finish this album is technically stunning and a pleasure to listen to. Incredible singing and beautiful orchestration by the Mozarteum Orchester Salzburg under the baton of Marc Minkowski mean this album should be on your player with earphones at the ready for anytime you think the world isn’t romantic or beautiful enough. Without a doubt it is my first great recorded opera discovery of 2017.