By the time Claudio Monteverdi arrived in Venice in 1613 he had already established quite a reputation from his time as court composer to Duke Vincenzo Gonzaga of Mantua. It was during his tenure at court that he had composed his first opera Orfeo for the Duke’s son and heir Francesco. A seminal work that tied together all of the various strands of music, recitative, drama, scenery and acting that would develop into opera as we know and love it. With this reputation under his belt he arrived in Venice not to work for another noble benefactor but to take up the position of musical director at St. Mark’s Basilica and eventually compose his later dramatic masterpieces Il ritorno d’Ulisse in patria and L’incoronazione di Poppea, for the paying public.

Il Combattimento di Tancredi e Clorinda was composed for the Venice Carnival of 1624 from a poetic libretto by Torquato Tasso. La Gerusalemme Liberata (Jerusalem Delivered) is a romantic tragedy set during the First Crusade and tells the story of Tancredi, an Italian knight and Clorinda, a Saracen maiden warrior who see each other on the battlefield and though they are in opposing armies they fall in love.

‘Tancred and Clorinda’ by Theodor Hildebrandt & still from production at the Baths of Caracalla in Rome in 2012 with Cristina Zavalloni as Clorinda & Lorenzo Carola as Tancredi.

One evening Tancredi spots a Saracen warrior outside Jerusalem and challenges him to battle which the Saracen gladly accepts. Because of their armour neither knows who the other is and that they love each other. During their combat Tancredi eventually says to his adversary:

‘I pray you. If in war there is a place for prayers, to reveal to me your name and station. So that I may know, whether in defeat or victory, whom my death or my life honours.’

but Clorinda refuses to reveal her identity and their gruelling combat continues in tragic ignorance. Eventually Tancredi strikes a fatal blow and Clorinda falls to the ground. As she lies dying she turns and says to him:

‘Friend, you have won. I pardon you; pardon me as well. Not my body, which fears nothing, but my soul. Pray for it, and give baptism to me, which all my sins washes.’

Tancredi gathers water from a nearby stream in his helmet and when he removes Clorinda’s helmet to baptise her the full horror of what has happened hits him. There lying before him is the woman he loved and he has killed her. As the now baptised Clorinda dies, with her last breath she says:

‘Heaven opens, I go in peace’

Tancredi has defeated his opponent but has lost his love forever, Clorinda has been defeated but has gained redemption and heaven. Who really won the battle. 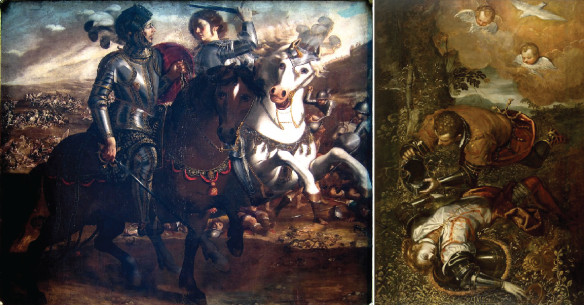 Part of the ingenuity of Monteverdi was that he was constantly experimenting with different musical styles to depict various emotions and situations like love and war. These ideas can be seen vividly in Il Combattimento di Tancredi e Clorinda. The music is paced to the rhythm of the contest between the two knights, speeding up and becoming intense and pulsing as they lunge at each other swords flailing and slowing down and quietening as they run out of breath from their exertions and gather their energy only to return again to combat. Monteverdi left very clear instructions about how these mood and sound changes would work. The instruments recreate the sound of horses trotting, swords clashing, triumphal fanfairs and repeated circling passages as the two combatants circle each other.  It’s quite a hard piece to classify as it’s only about 25 minutes long, consists of only one scene and is written for only two actors (not including the narrator) who spend the whole time in combat with swords clashing and only sing occasional lines. The vast majority of the singing is done by a narrator who watches and informs us about the action, thoughts and feelings in the two characters heads as they fight to the death.

Il Combattimento di Tancredi e Clorinda is an important piece of operatic history not least because although Monteverdi is considered by many to be the father of opera, only three of his operas have survived. Many have been lost or only snippets still exist. There is a very traditional performance on youtube by ASKO Ensemble of Amsterdam which closely recreates what an original production of the work must have looked like.

For a real baroque treat the DIT Conservatory of Music & Drama will present Il Combattimento di Tancredi e Clorinda along with Henry Purcell’s Dido and Aeneas as part of a baroque double bill at Smock Alley Theatre in Dublin on 18th & 19th of January. Information about this exciting production is here.