Giacomo Puccini was very impressed by the success of shorter format operas like Ruggero Leoncavello’s ‘Pagliacci’ and especially Pietro Mascagni’s ‘Cavaleria Rusticana’ and their ability to tell an emotionally charged story without the necessary complexity of plot and attention holding devices needed for a longer three or four act production. Rather in the way a short story can have all the elements of a full novel but presented in a stripped down and more immediate fashion, the one act opera could get to the emotional core of the story quickly and directly.

For a composer who had become world famous for his soaring romantic tragedies like ‘La Bohème’, ‘Tosca’ & ‘Madama Butterfly’ this would certainly be a change of ‘format’ at least but one which Puccini only half heartedly embraced in so much as his intrigue with this shorter format resulted in three distinct operas which he intended to be performed together resulting in a finished work that was considerably longer than any of his other operas, and the links between the three operas were tangential at best. ‘Il Trittico’ (The Triptych) comprises the operas ‘Il Tabarro’, ‘Suor Angelica’ and ‘Gianni Schicchi’. Puccini did eventually relent somewhat and agreed to let only two of the three be performed together if necessary and today they are regularly performed as the originally intended three, as two together or indeed as one on a program with a shorter work by a different composer. Sour Angelica for example is occasionally performed with the one act opera ‘La Voix Humane’ by Francis Poulenc because of their similar emotional scenarios and tragic endings. (A riveting production of La Voix Humane was toured by Opera Theatre Company last year with a gripping performance by Soprano Kim Sheehan). 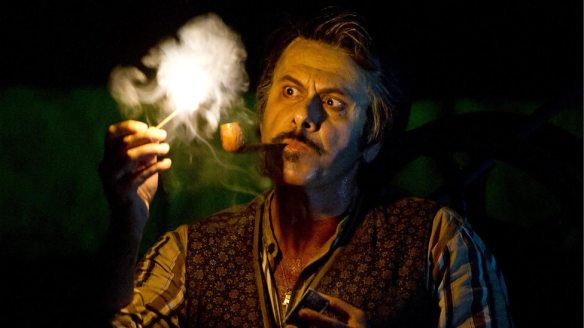 Briefly looking at the first two of the Triptych, Il Tabarro (The Cloak) is set on a barge in Paris in 1910 and is a tale of infidelity and revenge. Giorgetta, the young wife of the barge owner Michele, is in love with Luigi who works for her husband. They grew up together and dream of getting away from the endless struggle, misery and backbreaking work of life on the water. The lovers hatch a plan to run away together and Giorgetta tells Luigi she will signal him from the barge with a candle when he is to come for her. Michele has had his suspicions about his wife’s fidelity for quite a while and after confronting Giorgetta he goes up on deck and lights his cigar. The watching Luigi sees the light and believes it to be the signal from his lover so he goes on board only to be confronted and killed by Michele who now sees what the plan was. Michele covers the body with his cloak (the cloak he used to cover his wife and their now dead child with when they were sleeping on board). When Giorgetta comes on deck he reveals the dead body of Luigi and mocking her throws his heartbroken wife onto the corpse of her lover.

Could things get more dramatic and tragic? well with Puccini, yes! Sour Angelica (Sister Angelica) tells the story of a young woman who has been sent to a convent because she has had a child out of wedlock, a child she has only held and kissed once before he was taken away from her. Sister Angelica’s aunt, a rich noblewoman arrives at the convent to tell her that her younger sister is to be married and Angelica must sign over her inheritance to her since Angelica will have no need of it as she must spend the rest of her life in a convent. While signing the papers Angelica asks how her child is to which her aunt coldly answers that the child died two years ago. Angelica is seized by grief and remorse and seeing no reason to live drinks a poison so as to join her dead child only to realise that suicide is a sin and she will be parted from her child for eternity. As she dies she begs the Virgin Mary to forgive her sin. An apparition of a heavenly woman and a child appears in the convent door and the woman coaxes the child towards the dying Angelica who reaches out to him. Angelica realises she is forgiven and she will indeed be reunited with her son in death.

Italian Soprano Renata Tebaldi who recorded all three of ‘Il Trittico’ in 1962.

I have recordings of both these operas from 1962 featuring the sublime Renata Tebaldi in both lead female roles. By this time her voice was beginning to fade slightly and she avoids some of the high C’s which she was straining to reach. Ideally the roles of Giorgetta and Angelica, which place different demands on the voice should be sung by different singers. Georgian is a more powerful, strident and dramatic role where as Angelica requires the lighter touch of a more lyrical soprano. That said, Renata Tebaldi’s voice even in the early afterglow of its brilliance is a pleasure to listen to.

The emotional space which both female characters occupy is also vastly different. Although Il Tabarro ends with tragedy and murder, throughout the opera Giorgetta is happy and joyous for despite the claustrophobia of living on a barge with a husband she no longer loves she knows she will soon be escaping to a better life with Luigi. The emotional space for Sister Angelica is much darker, brooding and intense and is a different and more challenging role for a singer. Hers is a gradual descent into a despair which is only alleviated by the final ‘redemption’ of suicide.

Both these operas of tragedy, death, loss and redemption were premiered in 1918 as the world emerged from the cataclysm of the Great War. A war which Puccini did not personally participate in and had no great convictions about but one in which Italy lost hundreds of thousands of her young men in the icy ravines of the Dolomites and the killing fields of Caporetto.

The music in both operas owes a lot to Claude Debussy and the French Impressionist. Puccini by this stage in his career had well mastered the art of operatic story telling and creating beautiful and memorable melodies but in these short operas Puccini wanted to be more musically adventurous. Debussy’s influence can be seen in the use of block chords and the hypnotic and calming effect of the repetition of these chords up and down the scale. This is most notable in Suor Angelica where these repeated hypnotic figures create a contemplative almost religious effect.

Also these operas don’t have the roll call of showstopping arias Puccini helped built his career on but are more about being musically adventurous and highly dramatic using a lot of conversational vocal passages that fall between recitative and aria to push the action forward. That said there are a number of stunning arias like ‘Hai ben ragione’ sung by Luigi in Il Tabarro where he describes the misery of life working on the barges and ‘Senza Mamma’ from Sour Angelica as Angelica laments for her dead child.

Dublin Opera Studio will be performing their production of these two operas at The Clasac Theatre, Clontarf on Friday 22nd July and Drogheda Arts Centre on Saturday 23rd July before taking the production to Greece in September.