A lot of literature has sprung from the experiences of the Great War and one of the greatest examples is the epic poem ‘In Parenthesis’ by the Welsh artist and poet David Jones. Jones had served in the trenches throughout the war with the Royal Welsh Fusiliers and was present at the assault on Mametz Wood at the opening of the Battle of the Somme in 1916.

David Jones. Author of In Parenthesis

His experiences in the trenches and particularly the assault on Mametz where the Welsh Division lost almost 4000 men was the inspiration for In Parenthesis which Jones started writing in 1928 and it was eventually completed and published in 1937. In 2015 Welsh National Opera commissioned English composer Iain Bell to compose an opera based on Jones’ poem to coincide with the 100th anniversary of the Battle of the Somme. Bell, who’s quite new to the world of opera, is a very talented composer who specialises in choral works and In Parenthesis is his third opera. (The role of Kitty in his first opera ‘A Harlots Progress’ was created by Irish Mezzo Soprano Tara Erraught).

In parenthesis consists of two acts both about an hour-long with no overture so we are straight into the action where the lead character Private John Ball and his platoon are preparing for their march to Southampton to board the ship that will take them to France. Starting in the first act, as the men march to the coast, and continuing throughout the opera there are some wonderful choruses (A strong element of male choral singing would be expected in an opera about the Welsh). These choruses cement the idea of the common experiences of a group of soldiers but what separates Ball from the rest of his comrades is that he seems to have premonitions of the horrors to come, horrors that more slowly dawn on the rest of the men. Ball even sees the boarding of the ship in Southampton as ‘A slippery gangway to hell’ and these visions haunt him throughout the opera. 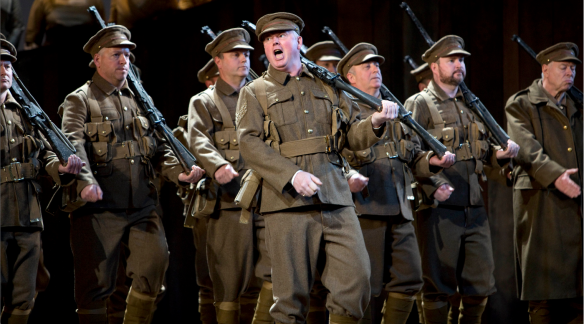 Also from the opening scene we have a female chorus who’s vocalising is like sirens calling the soldiers to their deaths like the sirens of ancient greek mythology. Their singing is haunting and beautiful but has an underlying unsettling darkness to it and the allusion works very well as the audience knows the faith that awaits the soldiers.

The soldiers are quite pleasantly surprised when they arrive in France and sing of the beauty of the countryside ‘O Flower, who’s fragrance tender’ but the arrival of the battle hardened ‘Marne Sargent’ puts an end to their lightheartedness as he fills them in on what to expect when they go over the top. This harrowing advice is soon followed by an artillery bombardment that dispels any lingering doubts they had about the nightmare they were heading into.

Act Two is set six months after they arrive in France and they are preparing for the opening of the Battle of the Somme. Great tension and fear is building up among the soldiers as they contemplate their fate yet they try to distract themselves with drinking, singing and reading. They console themselves by saying the real war is much further south only to find out that their new orders are to ‘March South!’ A grim reality dawns on one and all.

Peter Coleman-Wright as Bard of Brittannia and Alexandra Deshorties as Bard of Germania stand over the trench.

While on night watch Ball can hear the sound of the rats gnawing on the bones of the dead bodies on no man’s land ‘Scrut, scrut, scrut’ and at dawn the whistles blow and they are ordered over the top to attack the enemy positions in the woods. As they enter the wood some of the platoon are shot and even the trees themselves come alive and start to attack the soldiers killing them. Death doesn’t come from the enemy machine-guns and shells alone but from the very landscape itself. This is a wonderful interpretation of the fear and paranoia that has gripped the soldiers as the landscape itself wishes them dead. 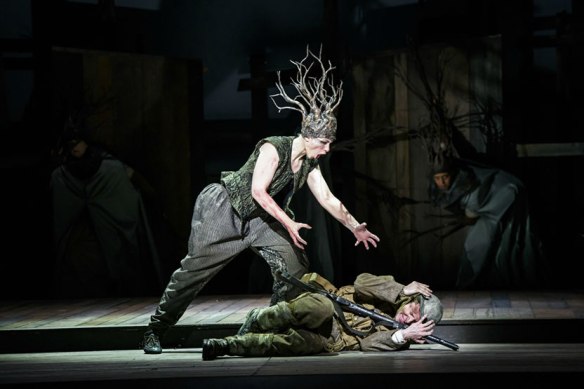 Alexandra Deshorties as The Queen of the Woods torments the soldiers.

The whole opera is quite tragic and highly dramatic and is certainly gripping viewing. Despite the rather depressing subject matter there are numerous lighter moments and the singing is wonderful. There is a strong religious undercurrent running through the whole opera which is understandable as Jones spent many years living in Christian arts communities and after converting to Catholicism he became fascinated by its mysteries and ceremonies. In an opera season which has had a number of big profile controversies about graphic and gorey scenes it is refreshing to see the carnage of the Somme dealt with in a more creative way with less appeal to simple shock value.

The Welsh at Mametz Wood by Christopher Williams (1918).