Three loud bangs and a cock crowing by way of an overture herald the opening of Franco Leoni’s opera L’Oracolo (The Oracle). There follows some pigeon Chinese shouts and cheers and we are straight into the action as our anti-hero Cim-Fen throws a client out of his opium den. Franco Leoni was an Italian composer whose works are rarely performed and largely forgotten today though he did compose a large body of work for the stage. A composer of ‘charming songs for the most famous voices’ a contemporary review read. Born in 1864 in Milan he spent many years in London composing for the theatre and died there in 1949. 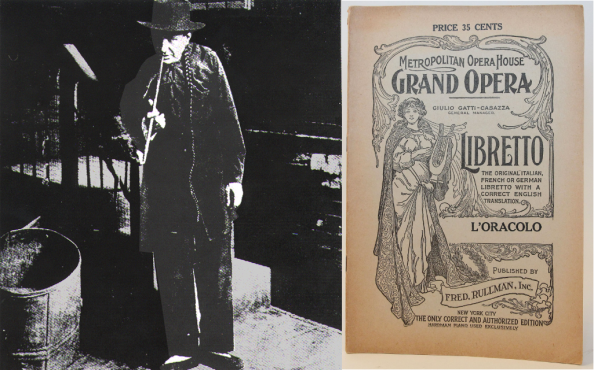 Antonio Scotti as Cim-Fen in 1915 and a printed libretto from a production at the Metropolitan Opera House, New York.

Of all his operatic works L’Oracolo which was premiered in Covent Garden in 1905 is his best known mostly thanks to Italian baritone Antonio Scotti who heard the piece in London and used his influence at the Metropolitan Opera in New York to have it staged there with himself in the leading role of Cim-Fen. It’s a relatively short one-act opera but full of intensity and emotion & there is very little let up as the action surges forward from high drama to tragedy and back again. Scotti so liked the role of Cim-Fen where he could immerse himself in a deplorable character with no apparent redeeming characteristics that he chose it for his final performance at the Met in 1933. Leoni had studied with Amilcare Ponchielli who was also the teacher of Puccini and there are certainly similarities between the two composers work, both being very emotionally intense and delving into the darker and seamier side of life.

Pauline Lightstone Donalda who sang the role of Ah-Yoe in the world premiere at Covent Garden in 1905 and Joan Sutherland who recorded it in 1973.

Set in San Francisco’s Chinatown it’s a pretty violent and lurid affair full of greed, evil, and revenge. The drama is laced with a kidnapping and two murders, one with an axe to the head, around the foggy docks of San Francisco. There’s no shortage of intensity in the action and indeed the singing moves quickly from one highly dramatic scene to the next with very little let up in intensity. In fact, one of the criticisms levelled at L’Oracolo is that it’s perhaps a bit too full on. In a nutshell, the evil Cim-Fen wishes to marry Ah-Yoe, niece of the rich merchant Hu-Tsin. Secretly Cim-Fen kidnaps Hu-Tsin’s young son and then offers to find the boy if he can have Ah-Yoe’s hand in marriage. There’s almost always a love triangle and L’Oracolo is no exception as Ah-Yoe is in love with San-Lui who also offers to find the boy for Ah-Yoe’s hand. Cim-Fen brutally murders San-Lui with an axe but his father Win-Chee discovers that Cim-Fen has kidnapped the boy and hid him under his opium den. He eventually rescues the boy and kills Cim-Fen. So there you have it. Evil fiend, innocent young maiden, tragic young lover… I know, but it’s opera and you’re not even guaranteed a happy ending.

If you like verismo opera you will love this one. Plenty of impassioned singing & although it is a bit different in that Ah-Yoe is not a great role for the leading lady and the spotlight is mostly on Cim-Fen a scheming and malignant baritone. Very odd indeed. Some pundits say this otherwise strong opera has fallen out of favour because it doesn’t have a strong female role that great sopranos were interested in performing and they are vital to putting bums on seats.

The 1973 recording featuring Tito Gobbi as Cim-Fen and Joan Sutherland as Ah-Yoe.

I was only able to track down two recordings of L’Oracolo doing the rounds. One is a quite strong live recording by Oper Frankfurt from 2010 and the other, which is probably better known is a 1975 recording with Joan Sutherland and Tito Gobbi taking the lead roles and conducted by Richard Bonynge. This is the recording I have and Gobbi is amazing as our evil anti-hero. His voice is deep, intense and booming even though it was recorded only a couple of years before his retirement. Both these recordings are available on Spotify and Amazon so make your own assessment of their merits. Some wonderful singing, plenty of action and, if staged right, great costumes & atmosphere all in a one-hour performance. What’s not to like. 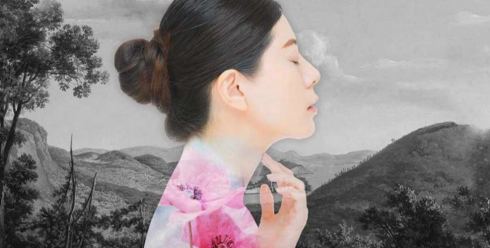 Wexford Festival Opera are presenting L’Oracolo as part of their 2018 programme.

Continuing its well-established tradition of reviving forgotten or at least neglected works Wexford Festival Opera are presenting a production of L’Oracolo this year in a double bill with Mala Vita by Umberto Giordano. A nice doubleheader of little performed Italian verismo styled pieces which should provide a very emotionally intense and draining evening.