We are not the masters of our own condition. Some things are already written & cannot be changed. Forces greater than ourselves dictate them. Bluebeard’s Castle is Béla Bartók’s only opera and it’s lack of immediate success probably contributed to his decision to abandon the form in favour of instrumental compositions. Written in 1911 it remained unperformed until 1918 when it was premiered at the Budapest Royal Opera as part of a double bill with his ballet ‘The Wooden Prince’. Both had libretti by Béla Balázs.

Bartók who during his lifetime was better known as a concert pianist is now one of Hungary’s must celebrated composers and indeed one of the most important modern composers internationally. Born in current day Romania, Bartók was something of a child prodigy who by the age of 25 was piano professor at the Hungarian Royal Academy. Among his students was the great Hungarian conductor Sir Georg Solti. The political turmoil in central Europe in the 1930’s caused him to emigrate to America in 1940 where he stayed for the rest of his life. Part of the reason for his departure was the rising anti-Semitism in his homeland under the premiership of Miklós Horthy. Bartók had many Jewish friends, not least Balázs, whose name he refused to remove from the credits of Bluebeard’s Castle thus incurring the displeasure of the authorities.

Based on a folktale by Charles Perrault the opera tells of Duke Bluebeard and his new wife Judith as she enters his castle for the first time. The castle is very dark and gloomy and on seeing seven doors Judith asks Bluebeard for the keys to open them so that she can let light and love into the dark and claustrophobic interior. As she gradually opens the doors the duke’s torture chamber, armoury, treasury & gardens are revealed, all smeared with blood until eventually the fifth door opens onto the dukes vast and beautiful lands which also have blood-red clouds drifting across them. Up to this point the castle is gradually getting brighter and Bluebeard tells Judith that she has seen enough, she has got what she wanted, the last two doors must remain locked.

‘you begged for… prayed for sunlight. See how the sun hath filled my house… Child, beware, beware my castle. Careful, it will shine no longer.’

But Judith insists in demanding the keys for the last two rooms. From here the mood changes and darkens as a sense of doom and forboding descends. The sixth room! a lake of tears, tears from the sadness that lived in the castle and permeates from it’s very walls. Bluebeard warns her not to ask for the key to the seventh room but she believes it contains the bodies of his murdered previous wives.

“I have guessed your secret, Bluebeard. I can guess what you are hiding… all your former wives have suffered, suffered murder, brutal, bloody. Ah, those rumours, truthful rumours.”

The seventh room does indeed reveals Bluebeard’s previous wives. One is found in the morning, one at midday, another in the evening. All are alive and in a zombie-like state. Judith, to her horror, is added to their number in a dark mantle and a rich crown: his wife of the nighttime. She enters the seventh room, the door closes behind her and the castle is returned once again to darkness.

Bluebeard’s Castle was written a number of years after Bartók along with his friend and fellow composer Zoltán Kodály had developed an interest in Hungarian folk music in 1905. Together they travelled around the countryside recording and logging the various musical styles among small rural communities. These musical patterns made their way into this opera. Although written in 1911 the work is not particularly dissonant or ‘modernist’ in sound. Bartók in his early years was very heavily influenced by the Germanic music of Wagner and Strauss but by the time he was writing Bluebeard’s Castle his influences were more folk and archaic. Yes, there are passages that are driven by minor chords but they tend to be used to reflect the darkness and claustrophobia of the castle rather than an attempt to reflect then current musical fashions. The opening of the ‘pleasant’ doors like the treasury, the secret garden and the vista of Bluebeard’s kingdom are accompanied by beautiful tonal passages that reflect the beauty being revealed. Up to the opening of the fifth door the castle gets continuously brighter. From then on a darkening creeps over it as the almost unstoppable and tragic conclusion gradually reveals itself. 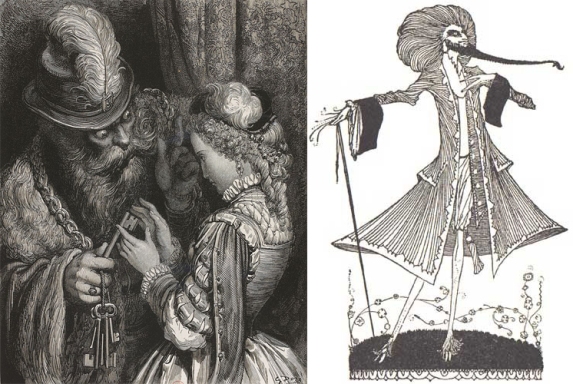 Two illustrations of Bluebeard, on the left by Gustave Doré & on the right by Irish artist Harry Clarke.

This is an opera I have grown to love. It takes a bit of listening to but as they say in musical circles ‘it’s a grower’. It brings to mind Benjamin Britten’s ‘Owen Wingrave’ in that it has the same dark supernatural theme in the background as the events between the characters are played out. It’s also quite a demanding opera for the performers as there are only two of them (not including the three non-singing wives) and aside from  it’s being a very emotionally intense work, for Judith anyway, they are continuously on stage and performing. There is no break from the gaze or the ears of the audience. Just as well it’s not more than an hour’s duration! The length of the piece and its minimal cast makes it a great choice for smaller opera companies even though Bartók originally scored it for an enormous orchestra which included an organ accompanying  the opening of the fifth door and one of the great stand alone high C’s of opera.

There are a number of recordings which are sung in the original Hungarian which can sound a bit odd when one is used to hearing operas sung in Italian or German. The recording I have is an English language version from 2016 on the Chandos label featuring bass John Tomlinson and mezzo soprano Sally Burgess. If one wants to see the full opera with English subtitles there is a good ‘movie’ style version on YouTube with Robert Lloyd and Elizabeth Lawrence from 1988. Irish National opera are also giving three performances of Bluebeard’s Castle this autumn in conjunction with the Dublin Theatre Festival. This will feature Joshua Bloom and Paula Murrihy. I’ll certainly be at one of those.