Jacques Offenbach, the man who brought us the music to the Can-can didn’t live to see his greatest operatic masterpiece performed. He died on October 5th 1880 and The Tales of Hoffmann (Le Contes d’Hoffmann) didn’t get it’s premiere at the Opéra Comique in Paris until February 1881. Offenbach was born in Cologne into a Jewish German family but moved to France where he converted to Catholicism and immersed himself in French musical culture and styles. He made his reputation in France as the composer of light-hearted comic operettas and was involved in several rather disastrous ventures into the world of theatrical production and financing.

Jacques Offenbach and a poster from an 1884 production.

After the Franco Prussian war of 1870 his German heritage caused him to fall out of favour with French audiences and he briefly moved to the US where he had a degree of success. He eventually returned to France but wrote little of significance until the posthumous success of Hoffmann which sealed his reputation as one of France’s greatest composers for the stage.

Although ultimately a quite depressing opera that catalogues Hoffmann’s heartbreak and ridicule it is a glorious musical experience and as uplifting in its music as it is depressing in it’s story. Throughout all his escapades poor Hoffmann seems to be the only one who doesn’t realise he is being laughed at and taken advantage of but eventually he finds his way through his real or imagined love affairs and back to his muse. It’s an opera of incredibly sparkling music with wonderfully beautiful arias and uplifting choruses that create an amazing tension between the lightness of the music and the darkness of the libretto.

Poster for the stunning 1951 film adaptation by Michael Powell and Emeric Pressburger.

The opera is based on various stories by German author E.T.A. Hoffmann. Our hero is a romantic dreamer who likes to drink and recount stories of his previous amorous encounters. Real or imagined we are never quite sure.  The opera takes the form of three stories Hoffmann relates to his friends, tales of failed love affairs that have made him bitter and untrusting of love. Firstly Olympia a mechanical doll, than the sickly Antonia and finally the courtesan Giulietta. In all these affairs a nemesis intervenes to ruin happiness for Hoffmann until finally he gives up on love affairs completely and returns to finding contentment in his art.

Fearghal Curtis as the inventor Spalanzani and his creation Olympia played by Claudia Boyle in the Irish National Opera production.

Hoffmann is by all accounts a difficult and complex opera to stage. It requires quite a large cast and a chorus of characters who observe and comment on Hoffmann’s folly as the opera progresses. His nemesis Lindorf always seems to have the crowd behind him as he continually foils Hoffmann’s affairs causing great laughter and mockery among the onlookers. There is also the tradition of a number of cast members playing multiple roles. In the Irish Nationa Opera production Claudia Boyle plays all four of Hoffmann’s lovers, Olympia, Antonia, Giulietta and Stella while John Molloy plays all four incarnations of his nemesis, Lindorf, Coppélius, Dr. Miracle and Dapertutto. Both Boyle and Molly rose easily to this challenge and the rather dramatic character changes were carried off with ease and professionalism.

An opera full of beautiful music, it contains a number of stunning show stopping tunes. Boyle took the incredibly difficult ‘Les oiseaux dans la charmille’ in her stride and delivered a wonderful rendition of the famous barcarolle duet ‘Belle nuit, o nuit d’amour’ with Gemma Ní Bhriain as the muse Nicklausse. Jullian Hubbard was a solid Hoffmann and had a particularly impressive delivery of the charming duet ‘C’est un chanson d’amour’ with Boyle as the sickly Antonio. 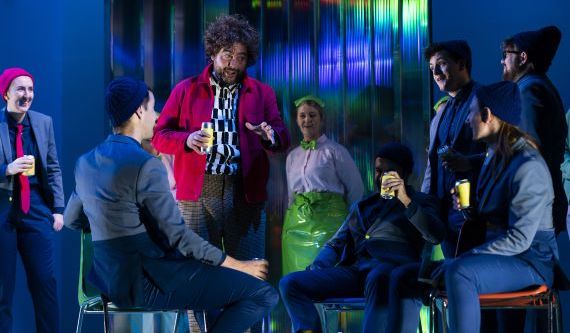 Julian Hubbard as Hoffmann entertains his companions with tales of his love affairs.

The reduced orchestra of seven players conducted from the piano by Andrew Synnott perfectly suited the small theatre space at The Solstice Arts Centre in Navan, a thoroughly modern if somewhat brutalist space with bare concrete walls. The set was minimalist and futuristic with large reflective panels and various coloured plastic props. The costumes were a mix of futurism and garish 70’s disco fashions, Olympia’s robotic outfit reminding me of Hazel O’Connor singing Eight Day. As with a lot of operas I attend the surtitles can be problematic and in this case those sitting near the front of the theatre had to look up quite high over the stage to follow the translation. (See the coming review of Bluebeard’s Castle on this issue)

This was all in all an enjoyable and very well crafted production. I have been to a number of operas directed by Tom Creed and they are consistently enjoyable and entertaining. The quality of both the singing and the performance was excellent. INO have an incredible troupe of performers and singers at their disposal and they all did the company proud.