Looking back through the lens of today it’s hard to appreciate just how revolutionary the operatic innovations of Christoph Willibald Gluck and his librettist Ranieri de’ Calzabigi were for audiences in the late 18th century. There were established rules and norms about what opera should be about and how it should be presented. It was a fairly locked down formula and deviating from it was not only creatively perilous but also risked courting the displeasure of the royalty & nobility who funded the whole operatic endeavour. In a nutshell being too radical could mean failure and poverty.

It was in this atmosphere that Gluck, an established and quite successful composer decided to embark on a project we now call his reform operas. Starting off with Orfeo ed Euridice in 1862 a series of highly successful operas retooled the operatic workshop and set in motion a sea change in operatic themes and presentation. They set about stripping opera of its unnecessary ornamentation, virtuoso adornments, excessive passages and dance scenes all of which they believed hindered the telling of the story. A refocusing on the reality of the drama and the most effective and fluid telling of that story became the priority. To instate a ‘Nobel Simplicity’ as de’ Calzabigi called it. 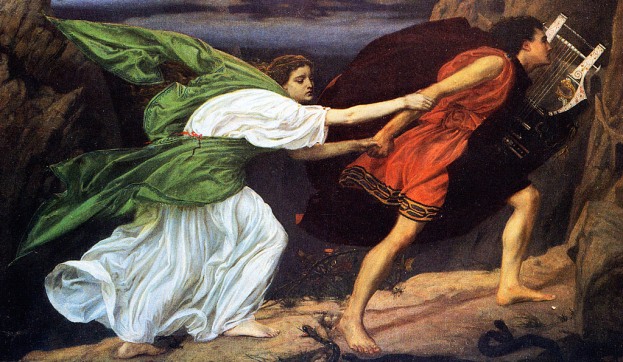 Orpheus and Eurydice by Edward Poynter.

The story of Orfeo and his wife Euridice is a well-known one from Greek mythology. Orfeo who can thrill man and beast alike with his music finds the body of his beloved wife Euridice and laments her death. Even the gods are overcome by the beauty and sadness of his music so they allow him to go to the underworld to bring her back to earth (what a comment on the power of music). The only condition is that he can not look at or speak to her. After again charming the gate keepers of hades with his music he leads his beloved back to life but on the way she looses heart because he will not look at or speak to her. His resolve weakened and wanting to console and reassure her he turns to look at her and she again dies before him. But true to form as he sings one of the most beautiful arias in opera over her body the gods again relent and restore her to life ‘Che farò senza Euridice’ (What shall I do without Euridice). I know what you’re thinking, an opera with a happy ending!

This was a concert performance in St. Peters church in Drogheda so no costumes, no sets, no acting and as relating to this opera in particular, no dancing. Mezzo Soprano Sharon Carty was engaging and in full voice as Orfeo and Soprano Sarah Power an excellent Euridice. Emma Nash took the part of Amore and the wonderful acoustics in the church did the voices of the main characters and the chorus proud. The Irish Baroque orchestra conducted from the harpsichord by Peter Whelan gave an enthusiastic and solid performance.

This was a stripped down version of a fully staged and choreographed production Irish National Opera are touring at the moment with United Fall dance company. Despite the fact that the singing and playing were wonderful I don’t really think a concert setting of this full opera worked all that well. Most operatic concert performances will be a selection of pieces possibly built round a theme, many of which the audience may already know or a full opera which is semi-staged with costume and some contextual setting. A classical work like this, even though it is not overly long at 1.5 hours, being sung in Italian with no staging robbed it of too much context and entertainment for it to be successful. It was a bit of a marathon to have no accompanying drama and indeed no interval. Having said that it was wonderful to have this seminal work from the operatic canon performed in Drogheda by such talented musicians and singers.