Although considered to be an American composer Gian Carlo Menotti kept his Italian citizenship all his life. He also kept close musical ties to his mother country most famously through his ‘Festival dei Due Mondi’ which he started in Spolento in 1958. As a student he moved to America to study at the Curtis Institute of Music in Philadelphia were he met lifelong friend and colleague Samuel Barber. Menotti was a very talented musician from a young age and wrote his first opera ‘Amelia al Ballo’ when he was just 25. He had relatively local success with a number of his early operas but it was not until ‘The Medium’, composed in 1946, that he achieved considerable international recognition and fame. A lot of Menotti’s operatic works are considered by some to be musically derivative and overtly dramatic. A mix of Italian verismo and American Hollywood. But this was a blend that proved very popular and rewarding for Menotti with later works like ‘The Consul’, ‘Amahl and the Night Visitors’ and ‘The Saint of Bleecker Street’ achieving great international success. The Consul was a Pulitzer Prize winner and also the first American opera to be staged at La Scala in Milan. 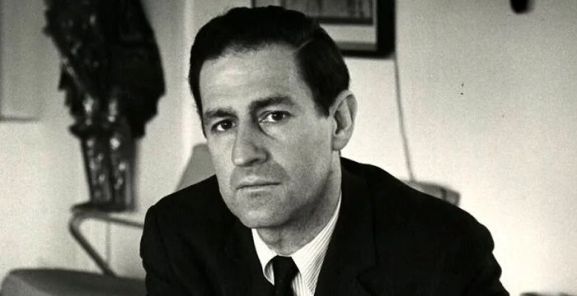 Though having great popular appeal many of Menotti’s works were shunned by the champions of modern musical trends. A contemporary observed:

‘Menotti has never written an original note in his life, and yet every note immediately has the signature of Menotti’

He was associated with what was seen as an outdated romanticism and lyricism while many of his contemporaries rushed headlong to embrace dissonance and serialism. Menotti was considered antiquated, a composer who especially in his later years was out of step with the musical establishment. This didn’t seem to bother Menotti too much and to quote the man himself:

‘Music history will place me somewhere, but that is no concern of mine’

The Medium is a short two act opera which has also been released as a film with contralto Marie Powers in the leading role. It tells the story of Madame Flora, called Bibi and the medium of the title, her daughter Monica and a mute boy called Toby. Bibi holds seances in her apartment where paying clients are fooled by the hidden voices and noises made by Monica and Toby as Bibi communicates with their dead children. During one seance Bibi feels hands around her neck and cries out. Her clients are amazed that she is so shaken by contact with the dead, after all isn’t she a medium. When her clients have left she demands to know who touched her, rounding on Toby as he denies being responsible. Mental disintegration begins to overtake Bibi. Her heavy drinking and fears that her scam seances have annoyed the spirits cause her to become more irrational and aggressive.

Marie Powers sings ‘Afraid, am I Afraid?’ from the 1951 film version directed by Menotti.

At a second seance Bibi hears the voice of a clients dead child. At this, the now fearful and unhinged Bibi tells her clients of the scam, gives them back their money and demands they leave. In her fury at the games she believes are being played on her she savagely beats Toby and throws him out of the house.

That evening Toby sneaks back into the house to see Monica who has been locked in her room but he makes a noise waking the sleeping Bibi. She shouts and screams to know who is there and the petrified Toby hides behind a curtain. Bibi in fear grabs a gun and seeing the curtains move fires killing the figure behind. As Toby falls dead to the floor, his identity concealed by the curtains, Bibi sings ‘I’ve killed the ghost, I’ve killed the ghost’. 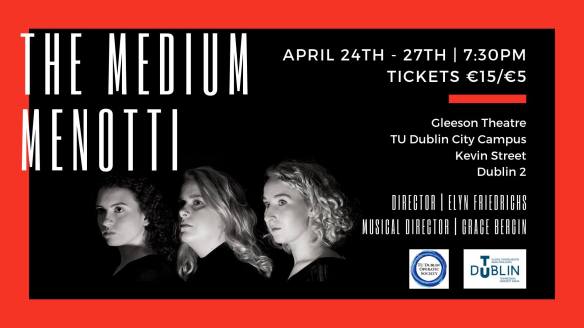 The production I attended was presented by TU (Technical University) Dublin Operatic Society which was founded last year to give students the opportunity to produce and perform operas. Held in Gleeson Hall at the TU Kevin St. campus the stage backdrop was black with a punch & judy show centre stage. A chaise lounge and drinks table were stage right. The lead roles were taken by Rheanne Breen as Bibi, Ami Hewitt as Monica and Niamh McPhilips in the tacit role of Toby.

A stand out from the get go was Rheanne Breen. In the lead role so getting the most air time and spotlight, she used it well with a fabulous vocal and dramatic performance. Her resonant and powerful soprano voice rung out through the hall and even where I was in the back row, every syllable could be heard. Wonderful power and articulation. Her portrayal of the psychological disintegration of the alcoholic Bibi was strong and convincing. She owned the stage with confidence and skill.

Amy Hewitt was a convincing Monica, the fearful and dominated daughter. A confident stage presence with obvious performance skills, her character’s innocence was accentuated by her white victorian style child’s costume. Amy’s higher soprano voice was strong, bright and sparkling but occasionally lacked some clarity.

Niamh McPhilips was very convincing as the mute Toby. Because it is a tacit role she only had her dramatic performance to bring her character alive. Nonetheless she virtually sung Toby’s thoughts and emotions with her acting alone. It was more like a mime performance than simply a silent role and she portrayed a character as engaging and believable as those with vocal lines.

The unfortunate and distraught clients of Madame Flora were played by Jakob Mahase and Kayleigh Quinn as Mr. & Mrs. Gobineau and Sarah Luttrell as Mrs. Nolan. All strong and impressive singers but given little room to shine in the rather limited scope of these roles.

This was an accomplished student production with excellent musicianship from the orchestra under the baton of  Grace Bergin and confident singing and performances on stage. On foot of the wonderfully successful launch of Opera Ireland last year and a renewed and revived interest in opera a new student opera company can only be welcomed and encouraged. There is a wonderful well of talent both on and off stage in these truly exciting times for opera in Ireland.